Typically, the skin disorder slowly regresses with age, and then disappears – in most cases – in old age. However, there are some more severe forms of keratosis pilar whose resolution does not occur spontaneously.
Incidence 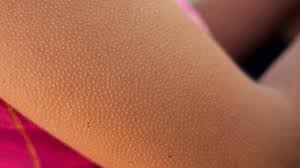 As mentioned, keratosis pilare is a rather widespread skin disorder, so much so that it can be found in about 40% of the adult population and in 80% of the pediatric population. This condition can therefore occur both among adults and among children, but the affected areas are different: in fact, if the thighs, buttocks and arms are the areas most affected by keratosis pilare among adults, the same in children manifestation occurs mainly in the cheeks and temples.

Furthermore, this type of disorder occurs indifferently in both sexes and without distinction of ethnicity.

Also for this skin condition, the cause is unknown; the only certainty is that keratosis pilare is included among the genetic diseases with autosomal dominant transmission. However, scientific statistics show that keratosis pilare appears more evident in winter, while in the summer the disease undergoes a slight improvement: sun exposure, which in many skin disorders is the triggering cause (eg solar lentigo, lentigo senile), therefore seems to considerably attenuate the affection.

Generally speaking, the onset of keratosis pilare occurs after the age of five. However, in many cases, the disorder is asymptomatic and therefore does not generate any kind of concern in patients.

In any case, the keratotic areas have a rough and punctiform appearance, a granular extension that is palpable to the touch: in this regard, the skin disorder is commonly called “hen’s skin”.

This rough and punctate appearance – typical of keratosis pilare – is due to the formation of keratinized papules with a diameter of approximately 1-2 millimeters, generated by the obstruction of the follicular orifices due to keratin plugs.

The disease does not involve any malignant consequences; the only problem is associated with the aesthetics and the psychological misunderstanding of the same, albeit bland.

Keratolytic substances (eg urea, propylene glycol) and abrasive soaps can alleviate the disorder; the cosmetic and pharmaceutical industries offer moisturizing products, salicylic petroleum jelly, lotions buffered with isotretinoin or lactic acid. Topical gels with 5-6% salicylic acid are also possible solutions; The use of horsehair glove is also recommended to create a mild abrasion on the skin.